2017 has started well for the NORTHERN RHÔNE, and better than those regions devastated by April frosts. “There was frost on the heights of the plateau, and on the plain by the Rhône on 22 April,” reports ANDRÉ PERRET from CHAVANAY, which is part of CONDRIEU and also SAINT-JOSEPH. “Our MARSANNE and VIOGNIER for the VIN DE PAYS DES COLLINES RHODANIENNES were hit, the SYRAH a bit also, the MERLOT not as it happens.” Since then, there was some hail on 23 June on the high vineyards above AMPUIS – very specific, not general, damage there.

These episodes apart, the vineyards have come through the high heat from the 10 June to the end of the month, when temperatures went into the 36°C-38°C range. 100 mm of good rain (4 inches, no storms) during May had fuelled water reserves, and was followed by one or two storms in June – one such storm in the second week produced 20 mm (0.8 inch) in just 15 minutes. Another 20 mm (0.8 inch) on 29 June also helped, with temperatures in early July dropping sharply down to the low 20°Cs. At the present rhythm, harvesting may be on 15 September, or a little earlier, with yields looking good. ANDRÉ added that his 1930s VIOGNIER “is in great form” this year.

Flowering across the NORTHERN RHÔNE has gone well, with only a little coulure (flowers failing to convert into fruit) here and there. However, GRENACHE in the SOUTHERN RHÔNE has been much harder hit by the coulure, with DANIEL BRUNIER of DOMAINE DU VIEUX TÉLÉGRAPHE at CHÂTEAUNEUF-DU-PAPE lamenting the fact that the 2017 crop is now certain to be small. There, temperatures were above 30°C from 9 June until 27 June, at times a full 10°C higher than the seasonal average, with some mornings showing 24°C at 06.00 – not much rest for the vines.

Only 14 mm (0.58 in) of rain fell on 28 June, so dry conditions prompted DANIEL to state that “we really need good rain before the 14 July – that would be cool for us.” The two classic ripening season rainfall dates wished for by the growers are 14 July [on France’s national holiday, no matter] and 15 August, before a dry run-in to the harvest.

Nearby at CAIRANNE, DENIS ALARY also lamented the coulure on his vineyards. “The year has been one of fast happenings so far,” he told me. “The vineyards set off at speed in March, but then three weeks of very cold weather, including days of 2°C-3°C, slowed them down and sent them to sleep. As it warmed up again, the vegetation had a growth spurt at the same time as the flowering, which is one of the no-nos for a good flowering, since the vine’s energy goes into the vegetation and not the flower.

We’ve lost 30% of our 2017 GRENACHE, meaning around 15% of our whole harvest, but that’s not as bad as 2013, when we lost 100% in some plots from coulure. Rain in the last week of June [30 mm, 1.2 in] was very helpful, but we are looking at an extremely early harvest as it stands, the whites maybe heading for 20 August. The speed in the vineyard has been phenomenal this year.” 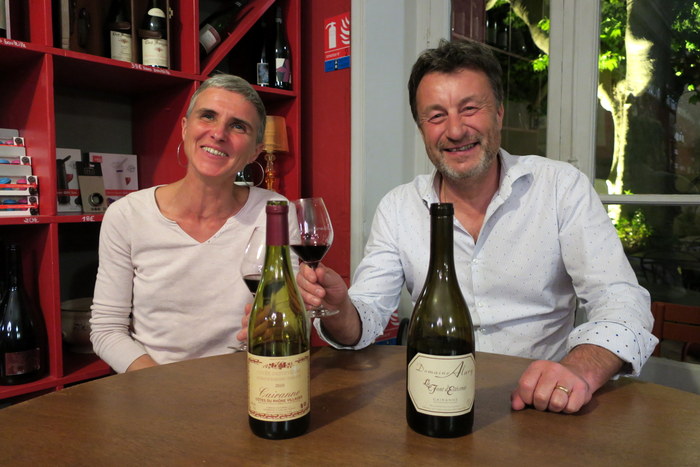 We also talked about the news that the appellation of CAIRANNE has been obliged by the highest jurisdiction in France, the CONSEIL D’ÉTAT in PARIS, to justify two paragraphs in its constitution, which was recently applied for the promotion from VILLAGES to CAIRANNE CRU. This follows a dossier submitted by the L’AMEILLAUD business and some CO-OPERATEURS seeking to recuperate the status of vineyards downgraded from VILLAGES to CÔTES DU RHÔNE when CAIRANNE rose to CRU – vineyards that were not considered of sufficient worth to be included in the promotion.

“Unfortunately, this matter has escalated, and is now in the hands of jurists and lawyers, and not within our control any more,” stated DENIS ALARY. “We are being asked to re-write two paragraphs, one on the “aire géographique”, the geographic lands of CAIRANNE, and one on what is obscurely termed the “facteur humain” – the human factor.” Definitions are sought on these, which leads us into existential territory more usually occupied by the likes of JEAN-PAUL SARTRE, namely “why is the CAIRANNE wine made on the commune of CAIRANNE?”, and being able to answer historical questions such as “why are 4,000 vines per hectare decreed?”

The lawyers will chew over the answers given by the growers of CAIRANNE, who plainly have better uses for both their time and their money. I get the impression that this will be ultimately regarded as a legal template for the whole of the French appellation system, especially when a region wants to be promoted, or vineyard zones are re-defined. Perhaps all growers could send 10 centimes to CAIRANNE for this service!