BUILDING BRIDGES IN THE VINEYARDS

The task of doing the bridge between vines is not universal, but the gains are clear to DAMIEN VACHE: “if I cut the apex of the vine, the vine will become stressed, and in turn will encourage the growth of entrecoeurs – inner shoots – down below, which will only serve to take energy away from the main areas of growth.

If you make the bridge, you avoid the development of the vine being blocked. It also allows the tractor to pass through when working the soils. I started this in 2014. It takes around 10 to 15 hours per hectare, and I do it in the first half of July, before the veraison – when the grapes change colour.” I bet DAMIEN  wraps his Christmas presents well. Here is the result: 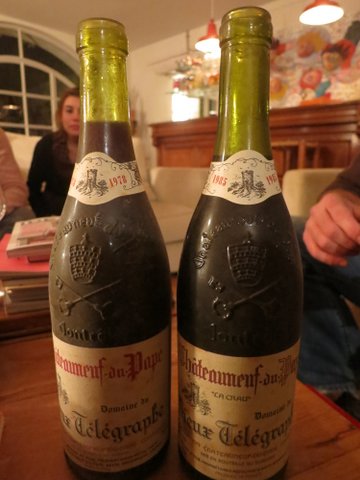 2016 is proceeding well in the southern Rhône vineyards, although the subsoils are in places dry. Visually, the vines do not look stressed, but a good 40 mm (1.8 in) or so of rain will be very useful in the next ten days for the more porous soils. However, the forecast is for a fine two weeks towards the third week of July. There is only a tiny bit of oïdium, likewise a only few mildew stains here and there.

The usual prayer of the growers is for a rainfall around the national holiday of 14 July, and a similar rainfall in mid-August. Then, hopefully, it’s the home straight into the harvest. Yes: in theory, it is!

However, in the case of DOMAINE LA MONARDIÈRE at VACQUEYRAS, father CHRISTIAN VACHE had this to say:” the bunches are already very fat, so rain will not suit us now: in fact, it would be catastrophic. If it doesn’t rain, it will be a late harvest, and could be a grand year, in the style of 1995 or 1998.”

AFTER AN EXCELLENT 2015 VINTAGE, PREPARATION FOR 2016 AT TAVEL