It’s a well known fact that CORNAS is the capital of the NORTHERN RHÔNE, but it’s also the capital of the ARDÈCHE winemaking region. The département number 07 runs along the right bank of the RHÔNE, with hilly outcrops creating a series of valleys and gulches that feed the mighty river with much of its supply south of LYON, with the notable exception of the RIVER ISÈRE at CROZES-HERMITAGE; then it is the west bank that prevails once more until the reaches of the VAUCLUSE [département number 84] flow into it via the likes of the RIVER OUVÈZE.

The northern area of the ARDÈCHE is marked by influences of MASSIF CENTRAL granite, the local culmination being MONT PILAT, in view from CÔTE-RÔTIE and CONDRIEU; as that seam recedes, it is taken over by more southerly influences, a greater limestone and clay presence, with multiple jagged gorges and rivulets whose twisty turns are prized by canoeists when the RIVER ARDÈCHE is high.

There’s an interesting criss-cross near MONTÉLIMAR, by the way, since the LOIRE rises West of the nougat capital of France, while the ARDÈCHE river runs into the RHÔNE at PONT ST ESPRIT, some way South of MONTÉLIMAR. Mighty rivers, opposite flows, vastly differing destinations and riverside dwellings ranging from the functional along the RHÔNE to the splendiferous along the LOIRE.

With true legends such as the CHAVE family resident in the ARDÈCHE since 1481, and newcomers such as CHAPOUTIER also ARDECHOIS, the region is populated by high profile winemaking dynasties. AUGUSTE CLAPE came up from the AUDE département (number 11, capital CARCASSONNE) in his youth, but his heirs PIERRE and his son OLIVIER [and his son RUBEN] all qualify for true ARDECHOIS status, as do the GRIPA and GONON families who live at MAUVES. I can also lob in ALLEMAND and BALTHAZAR as other pedigree Ardechois. All are hard working, practical people whose outlook tallies with the surroundings of their upbringing.

Two leaders of the organic movement in the NORTHERN RHÔNE also come from the ARDÈCHE – JEAN DELOBRE [LA FERME DES SEPT LUNES] and JEAN-PIERRE MONIER [DOMAINE MONIER-PERRÉOL], who both quit the factory-like conditions of the CAVE DE SAINT-DÉSIRAT to go their own way; JEAN started organically in 1997, and went solo in 2001. JEAN-PIERRE’s great grandfather raised goats, sheep and cows and fed them homegrown beetroots and hay, his vineyards laid out in alternate rows of vines and peaches. JEAN-PIERRE dropped their last fruit trees and became a vineyard-only grower by the 1990s, and also left the CAVE in 2001, with biodynamic practices in place by then.

There’s a pause in the vineyards of the right bank after the limestone cliff of CRUSSOL, opposite VALENCE, before one enters the SOUTHERN ARDÈCHE, the region that for years has been the destination of the Beau Monde of the Paris Left Bank [more than the bourgeois-centric areas of the 8th and 16th arrondissements - more likely to have villas on the CÔTE D’AZUR].

The dried stone houses are rugged to the eye, and often rugged to inhabit, but people become extremely closely attached to their dwellings in this land of savage, wild beauty. There is quite a movement in organic, biodynamic and Nature wines in the lower ARDÈCHE, too. Free spirits that range from the sensibly fundamental to the outrageous, cork poppingly off the wall. ALICE FEIRING [author, NAKED WINE and LOVE, or HOW I SAVED THE WORLD FROM PARKERIZATION] is spotted in these climes from time to time, and the discourse is a lively one.

SAINT MARCEL D’ARDÈCHE is an established epicentre for the SOUTHERN ARDÈCHE and its organic wines, via LE MAS DE LIBIAN [biodynamic also] and the DOMAINE SALADIN, both run by strong-willed, enterprising women. A neighbour – on the next hillside to the north of the galet stone soils of MAS DE LIBIAN – is a relative newcomer, the biodynamic and organic DOMAINE DES ACCOLES, whose story brings together several threads of the narrative so far. 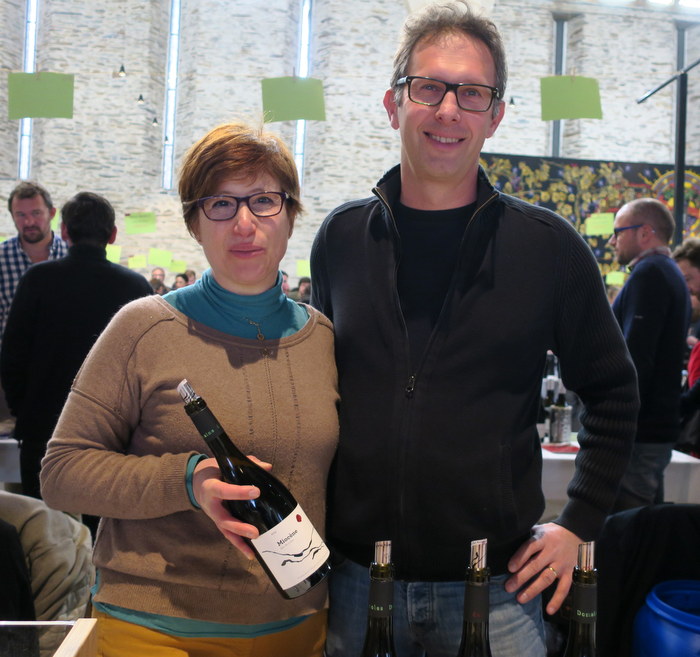 FLORENCE and OLIVIER LERICHE worked at the NUITS-SAINT-GEORGES DOMAINE DE L’ARLOT in BURGUNDY from 1998 to 2011, en route converting it to biodynamic practices, but would retreat to the ARDÈCHE for relaxation, having bought a tumbledown cottage near PRIVAS there in 2005. Their roots are RHÔNE-ish, and when an 18.5 hectare vineyard came up for sale in 2010 at SAINT MARCEL, a vineyard where the old owner, a Co-operateur, had stopped using weedkillers, they jumped at the chance to launch their organic and biodynamic project under their own flag.

The DOMAINE DES ACCOLES range has been IGP ARDÈCHE, but is almost wholly VIN DE FRANCE now. I was very impressed with their work on the mature CARIGNAN – 1950s and 1960s – since with a wine such as the GRYPHE they have succeeded in coaxing out a perfumed elegance from it, far removed from the old South-West France acerbic, sometimes harsh wines of yore.

“We adore the CARIGNAN,” states OLIVIER. “it’s so often seen by many RHÔNE producers as too susceptible to oïdium, as producing too heavily, giving dilute wines. The combination of our clay-limestone soils, with early harvesting, gives low degree and very fresh wines, so there’s a balance of power and lightness of touch, often with a very delicate tannic grain and aromatic notes that are quite wild. As opposed to the PINOT NOIR, it likes oxygen, all the more so when it is harvested early.” The ACCOLES set of wines is uniformly elegant, with a bonny surprise in the form of the white CARIGNAN GRIS called L’INATTENDU.

Another organic ARDECHOIS domaine to have impressed me is the 25 hectare MAS D’INTRAS at VALVIGNÈRES, North-West of SAINT MARCEL. Their range is wholly IGP COTEAUX DE L’ARDÈCHE, run by cousins DENIS ROBERT [commerce] and SEBASTIEN PRADAL [vinifcation]. DENIS explains: “I had a grave allergic reaction to a chemical product in 1998, which prompted my progressive move towards a natural and organic approach over the past twenty years.” 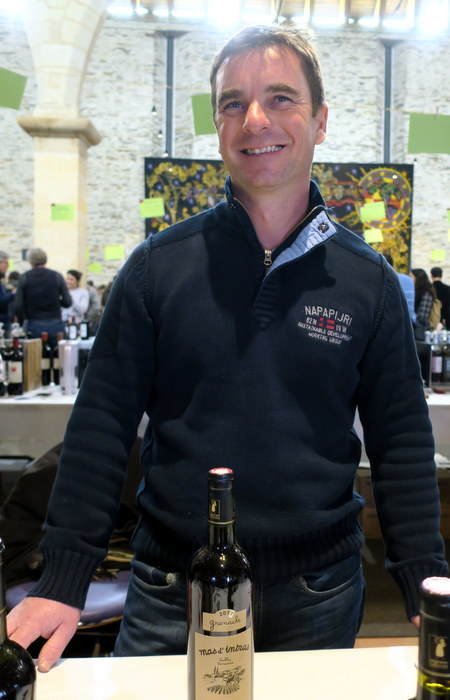 Compost with the marc of grapes, plant-based products instead of copper, some of the wines with no added SO2, solar panels on the cellar, the use of 400g bottles, lighter than the standard 550-600g – “that alone saves more than 20 tons of glass in one year!”, and, until recently, dispatch of wine for PARIS or BRUSSELS via the river system from MONTÉLIMAR on a small river boat [40 times less environmental impact than road transport, especially due to the absence of acceleration and braking] that sadly stopped working in the spring of 2018 due to lack of demand: there’s a long and interesting variety of approaches in a coherent pro-environment policy here.

Vines at 250 metres on clay-limestone soils and careful vineyard and cellar handling by the vignerons result in clear and pure wines. I favour the oak-free cuvées, for example the natural, authentic CUVÉE DES HELVIENS [70% GRENACHE, 30% SYRAH], while there’s another very good CARIGNAN here, one with typical CARIGNAN fibre, but also finesse.

The growers of the SOUTHERN ARDÈCHE are more demonstrative than their NORTHERN neighbours, reflecting their warmer context, but the ability to think along individual, determined lines remains a communal trait for the residents of these hilly lands all across the ARDÈCHE.

THE PIMPERNEL OF THE ROASTED SLOPE