APRIL IS A REVEALING MONTH

If you choose to explore the vineyards as I do, being one of a dying breed of journalists who regularly visits them rather than rushing straight to a tasting room, April is a revealing month to observe what is really going on.

It’s before the leaf canopy has developed, and the vines stand naked and brown, their curious shapes in direct proportion to their age. The quality and health of the wood, the sheen or lack of it, can be seen. So can the ground on which they grow, and that can be one of the most dispiriting aspects of any viticultural inspection.

Lunar landscapes are frequent – not a trace of grass or flower or weed, just a pale brown, deathly setting. The use of Roundup is most depressing. Not only is its key ingredient, glyphosate, a potential menace to human life, it also clears out all life in its path. Gone are the insects, the labyrinth of diversity. 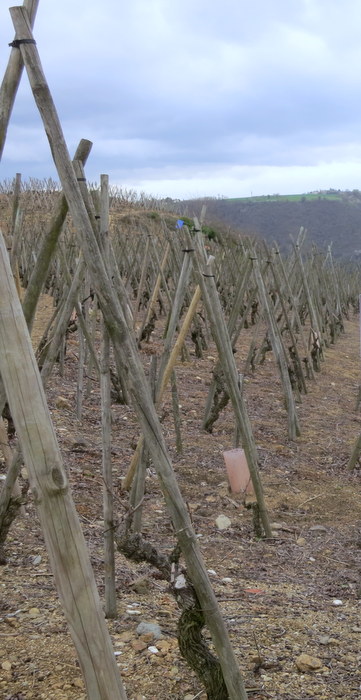 Many growers on hillsides claim this is the only way they can work. The slopes and terraces cannot be worked mechanically  - or easily – they say, so this is the only method of keeping things under control. The counterpoint to the weedkillers is the application of compost. So you kill the living daylights out of a place, then “compensate” with rotted matter.

Agitation has been rife about the use of Roundup, with a petition in late 2017 signed by 1.3 million people to urge its banning. In the event, the EU voted to extend its use for five years, until 2022. Since then, there has been a vote in the Netherlands to ban glyphosate use, while PRESIDENT MACRON wants its banning to be brought forward in France to nearer 2020-21. Glyphosate is a core ingredient of Round up. At present, it is hard, if not impossible, to buy Roundup as a private individual in FRANCE.

In the NORTHERN RHÔNE, with its hillside vineyards, we can take the example of CÔTE-RÔTIE and CONDRIEU. Out of over 100 domaines, there are very few officially certified organic. M CHAPOUTIER work their vineyards with a pickaxe, manually, while PAUL JABOULET AÎNÉ have also converted to organic, and spend a lot of time and money on their vineyards.

Another which is organic is DOMAINE GEORGES VERNAY. Then there’s CLUSEL-ROCH, who along with JEAN-MICHEL STÉPHAN, have been two of the pillars of the organic community and philosophy for decades now at CÔTE-RÔTIE. At CONDRIEU, a recent organic domaine is the DOMAINE CLOS DE LA BONNETTE, whose ISABELLE GUILLER has been organic for many years – on five hectares of fruits and vegetables - before turning to wine in 2009. However, absent are names that appear to have an environment-friendly image, but whose vineyards are spartan to the eye.

With pressure mounting against the use of toxic herbicides and weedkillers, growers are in a bit of a tizzy. There is a less aggressive product called Beloukha, manufactured by a Belgian company, Belchim Crop Protection. This is made up of 70% pelargonic acid, and destroys weeds except for the roots. It is said to absorb into the soil easily, but has not yet been accepted by official bodies inside France. By contrast, Italy has been more active in going down this trail. Roundup contains only a tiny percentage of Pelargonic acid.

Obviously, organic costs money. It implies increased labour, perhaps the requirement of local people on part time contracts, rather than just occasional labour which can be used for simple but time consuming tasks such as tying the vines as their shoots grow.

Organic complicates life. Indeed, the 1970s marked the call by the chemical companies in their literature that growers could put their feet up, take holidays, switch off thanks to the wonder properties of Agent XYZ. “You don’t have to be chained to your vines” was the message of those days, supported by endorsements from the Ministry of Agriculture.

I know from my humble abode in Sussex that organic multiplies life in the soils and in the air. That has been my method in the twenty years I have lived here. The soil life is tremendous – I couldn’t begin to name the names of all the insects, beetles and worms I find. I hand weed the gravel on the drive, much to the amazement of neighbours.

In those twenty years we have witnessed the arrival of thrushes and mistle thrushes, previously endangered, of two varieties of woodpecker [green and greater spotted], of songbirds such as nuthatches, returning blackcaps and firecrests. To say nothing of the butterflies. Their presence is a reward in itself.

One could argue that, given the lazy use of Roundup on hillside vineyards, the price of the wine is high. If you’re not in the vineyards very often, perhaps the wine should cost less. OK, additional costs of damage to walls has to be taken into account, and the nay sayers will always argue that if you work the soil, erosion will follow after any heavy rain: another extra cost from that.

However, the Day of Reckoning is drawing near. MACRON has offered an out in saying that perhaps 10% of cultivators will be exempt from the glyphosate ban, especially those on hillsides, but perception [and the dread hand of social media] will play its role in all of this. Worst hit will be domaines that have expanded to include vineyards across several appellations. Juggling commitments will be difficult. A two generation domaine working not more than eight hectares will be OK, as will “rich” estates or businesses.

The coming five years are going to see potentially far-reaching changes in the production of hillside wines. As consumers, greater awareness of what goes on behind the scenes will play a role in setting some basic ground rules.

FAREWELL TO THE WINES OF A REMARKABLE GENTLE MAN

THE PIMPERNEL OF THE ROASTED SLOPE 185