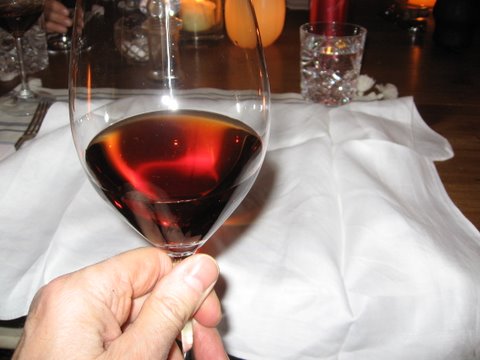 40 years of travel together: the 1971 Côte-Rôtie of Georges Jasmin, drunk at home in England in December, 2011, the last of the 6 magnums hand produced for me by the Jasmins

VETERANS CORNER is a few of the old wines, les anciens, that I have drunk with pleasure, often when they should no longer have been running with the pack. There is no strict theme, except the thought that old bottles do indeed tend to provide the truth (to quote Gérard Chave at Hermitage). A lot of these were never destined for the spotlight, nor did their growers actively seek acclaim through flashy winemaking.

If any readers have also drunk these wines in recent times, any comments would be welcome, and would be posted up as well. Once logged, in, to read the close-ups, click the subheading The Wines in the Left Hand column immediately under the Veterans Corner heading.

FEBRUARY 2012: a journey down memory lane with a magnum of 1971 CÔTE-RÔTIE made by GEORGES JASMIN, grandfather of PATRICK, and personally bottled as a magnum for me. It allows a look back into Ampuis of those days.

SEPTEMBER 2011: my thoughts on LE VIEUX DONJON at CHÂTEAUNEUF-DU-PAPE, a domaine that makes just one wine, as opposed to lots of super-cuvées. I reflect on the history of the domaine, and notably on its 1990 and 1981.

OCTOBER 2010: to see some thoughts on drinking the 1996 CHÂTEAU RAYAS CHÂTEAUNEUF-DU-PAPE WHITE, in reply to a subscriber from Norway. Go on, Norge!