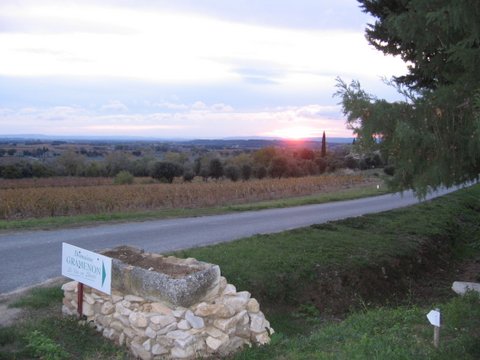 A November sunset at DOMAINE GRAMENON, since 1979 a leading organic Côtes du Rhône domaine in the higher reaches of the Southern Rhône, based in the cool zone of Montbrison-sur-Lez, around 300 metres up.

This section covers tastings other than precise domaine or estate verticals, and concentrates on older vintages. Descriptions in bold indicate recent postings.

I am aware how few professionals have ever heard if, let alone tasted, wines from this enclave in the hills east of NYONS. A full report from summer 2013 on a region whose wines are not only poorly known, but also underestimated. Please Log In. If already logged in, draw the mouse to the right and click on the title sought in the next column.

A tiny LIRAC domaine run by the impressive ISABELLE BOULARD. An old-fashioned visit to this domaine. Please Log In. If already logged in, draw the mouse to the right and click on the title sought in the next column.

Late March 2012 in fine weather in Paris: two of the original organic domaines from the Rhône - DARD & RIBO and DOMAINE GRAMENON - were joined by DOMAINE ROMANEAUX-DESTEZET OF HERVÉ SOUHAUT. Most of the wines were 2011s. Once logged in, click on the L-H tab 2011 ORGANIC RHÔNES to read about this event.

A tasting of Séguret Village reds, whites and rosés was held at the Paris restaurant called Fish in the arty rue de Seine, left bank in July, 2011. Juan Sanchez and Drew Harré are also the owners of La Derniere Goutte (The Last Drop) which is the wine shop just around the corner. The collection of wines was a mixed bag, one of the main features being that, despite the encouragement of the Syndicat des Vignerons, under half the domaines submitted wines. For a report on this Village, please click on the subtab Séguret in Paris, 2011 in the Left Hand column once you have logged in.

A look back at 13 Cornas from different domaines spread from 2006 to 1983. A fine occasion. Please click on the subtab Cornas in the Left Hand column once you have logged in.

Wines that contain little or no sulphur dioxide, SO2, or sulphites (sulfites). Intellectually, I lean towards Les Vins Naturels. Let René-Jean Dard of the Crozes-Hermitage Domaine Dard & Ribo explain the terminology: "Japan started this. My ex-wife is Japanese, and we have always sold a lot of wine to Japan since 1996. They termed our organic wine "vin naturel" or "natural wine", and that was the first time we heard that title."

To read more about the leading Rhône domaines and their thinking in this field, please click on the subtab Les Vins Naturels in the Left Hand column once you have logged in.

Two magnificent old bottles of Condrieu, both made by the maestro and saviour of Condrieu, Georges Vernay, have been enjoyed in recent times. And "they" say Viognier cannot live, a notion I have always vehemently opposed. The 1976 was the Coteau de Vernon, the 1979 his regular cuvée. The former was drunk at the domaine in November, 2009, having been brought back to its original home by me from England. The latter featured at the end of the Ledbury Restaurant lunch on 25 June, 2008, when I served a wrapped up in tin foil 1979 Condrieu from Domaine Georges Vernay, a wine I had bought at issue from Yapp Brothers in England. To read more about these most unusual bottles, please click on the subtab 1979 & 1976 Condrieu, Georges Vernay in the Left Hand column once you have logged in.

To find out impressions after 10+ years, and to recall how the harvest and summer of 1998 panned out, please click on the subtab 1998 Châteauneuf-du-Pape review in the Left Hand column once you have logged in.

Tasted in London, courtesy of their importer Mentzendorff & Company, on 27 April, 2009. Please click on 2008 M.Chapoutier in the Left Hand column once you have logged in.

These high quality négociants, a mix of Rhône and Burgundy, have relied on access to prime old vine plots from very small growers since they started in 1994. In those days, the world paid more attention to the oaking, and the fact that it was mostly from the venerated Troncais forests of central France. An early supplier of top grade wine was Noel Verset at Cornas, for instance. The years have rumbled past, and there are times when I find these wines somewhat anachronistic: drinkers are often seeking fresher fruit and definition in their wines, while the issue of whether varieties such as the Grenache should be raised in oak, let alone new oak, still pertains. Some of the wines are right on the mark, though, and do not seem overly priced. A December 2008 tasting at the British importers, Corney & Barrow, revealed more about the latest vintages, the youngest of which was the 2004. Please log in to Tardieu-Laurent under the Cornas appellation.

The latest from this important Rhône house, where I am troubled by the international, not Rhône, character in the wines following the purchase by the Swiss financier Jacques Frey. The 2006 and 2007 domaine wines (all those from their own vineyards only) were tasted in December chez Jaboulet. Please see the PJA entry under the Hermitage appellation heading.

A review of 2003 Châteauneuf-du-Papes was conducted at the village in mid-June 2008, when 15 Tradition wines were tasted, and 16 Prestige Cuvée wines. Please log in.

A review of 2000 Châteauneuf-du-Papes was conducted at the village in mid-June 2008.
8 Tradition wines were tasted, and 11 Prestige Cuvée wines. Please log in.