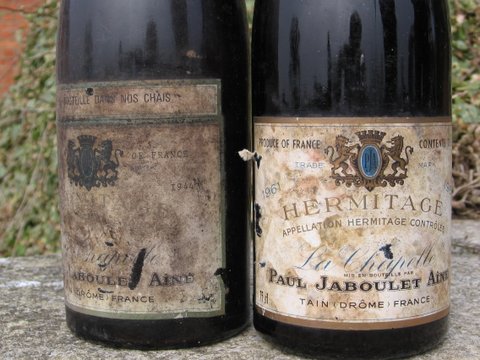 THE OLD BOYS REUNION: HERMITAGE LA CHAPELLE FROM THE SECOND WORLD WAR, 1944, AND THE INDEED LEGENDARY 1961, WHICH TRAVELLED TO THE USA IN THE 1960s, AND RECROSSED THE ATLANTIC IN 2010 TO NORTHAMPTONSHIRE, ENGLAND. See Below

The Big Tastings concentrates on vertical comparisons of leading domaines. Here you will also find the Domaine Jean-Louis Chave, whose red Hermitage 1975-2004 was compared over two days in London in November, 2007. There is an essay attached to the event, covering the context and themes to emerge from the tasting. Also present here are 15 vintages of white Hermitage Domaine Jean-Louis Chave (April 2008). and a vertical of Château de Beaucastel from Châteauneuf-du-Pape (Nov 2007 in Hong Kong). If a visit to a domaine produces several vintages in sequence, they will feature here as well. The notes and grower comments will of course also appear under the individual domaine`s listing, alongside previous tastings of those wines. The Chave 1978 has now been tasted over a dozen times, for instance.