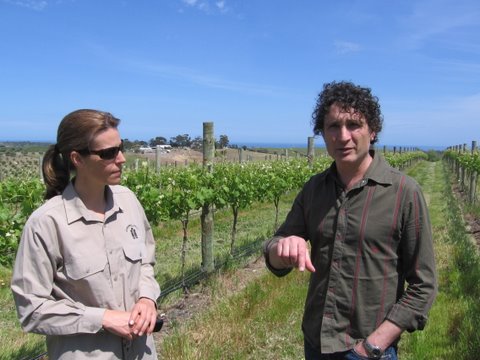 VINEYARD AND CELLAR TOGETHER: RACHEL STEER AND MIKE FRAGOS, WITH CHAPEL HILL WINERY IN THE BACKGROUND, McLAREN VALE, SOUTH AUSTRALIA

I spent a fascinating 10 days in McLaren Vale, South Australia, in October, 2009, and have written this up from a Rhône standpoint - what is going on with the established grape varieties such as Shiraz, and the more up and coming ones such as Grenache, even Cinsault and Carignan entering the picture. Please log in to read about this coastal region south of Adelaide, one that is well worth a holiday visit.

Having fought off lunacy at Cornas recently, where the proposal to construct an apartment block on 100-year old Syrah was overturned, the same threat has hit South Australia`s McLaren Vale region south of Adelaide. This time it is for an all bells and whistles new 77 hectare suburban zone called Seaford Heights, driven into the vineyard region. McLaren Vale is definitely one of Australia`s quality wine regions, but almost as importantly, it is making great efforts to express that to keen, well-informed wine drinkers around the world. There has been a very detailed geological map produced, and sub-regions that would resemble appellations are being drawn up. Local terroir and ID are top of the agenda for the future here.

Mind you, Cornas was a tiny project compared to this, which has local growers reaching for the Orwellian adjectives, as expressed to me by Dudley Brown, head of the Syndicat and a grower with a broad view, given that he was raised in the USA: "the plan is for commercial centres, 1200 dwellings and 2500 residents in the ominously named "Phase 1." The majesty of  Phase 2 has not been revealed to us yet.  None of the many hundreds of pages of planning documents ever contemplated the strategic nature of the site as the gateway to the McLaren Vale food and wine tourism region, the Fleurieu Peninsula or Kangaroo Island beyond. These are South Australia`s largest tourism areas outside of Adelaide. Nowhere in any document was the effect on tourism or the grape, food and wine industry contemplated. In fact, none of those key words are mentioned once in any document. Nor was there any logical or physical attempt to integrate this new development into the existing grape wine and food tourism economy of the McLaren Vale region. It`s just more suburbs bumping right into vineyards.

We are not hysterical or whinging "NIMBY" protesters but rather 500 growers winemakers and tourism operators that generate nearly $1bn p/a for the economy of the region and the region`s largest employment base. We generate 9.8% of the national wine economy by value from about 3% of the crop. We export more dollar value than any other wine region (GI) in Australia and at the highest average litre price.

We are looking forward 100 years and questioning the appropriateness and suitability of this type of development in this strategic location with this extraordinary geology when we know that with 20-30 years of vine age, this site may become one of the world's great terroirs."

I would urge drinkrhone readers to fire off an email to the Minister involved in this deplorable case - his address is minister.holloway@sa.gov.au

I reproduce my letter below:

When I left McLaren Vale last year, having been the International Judge at the Wine Fair, the passport official in Melbourne Airport snapped shut my passport after I told her my profession was that of wine writer, and said "Aussie wines - they're all mass produced." You could not have a clearer example of the challenge your country, your state of South Australia and the individual regions face in terms of regaining the international and the local wine buying markets.

McLaren Vale has been working hard to organise the area into precise local subdivisions that increase people's awareness of the geography, geology and special local ID of the vineyards, and have shown themselves capable of making hand-crafted wines with a personal story - ones that can successfully compete with the likes of French, Italian, Californian rivals, all of which are the sort of wines the international drinker now wants to appreciate.

I cannot think of a worse message than that of building over vineyards in McLaren Vale, as if no-one really cares about any heritage or long-term economic reality, or rather do care, if a fast buck can be made.

Twice in my life I have had to mount campaigns in the Rhone Valley in France to stop building of villas on hillside vineyards that are some of the best in France. The last campaign, in the village of Cornas, where 50 to 100-year old vines were threatened, attracted a lot of international disapproval, and the Mayor proposing the scheme was duly thrown out of office at the next election. The current Mayor of Cornas realises the importance of this vineyard for the region, for its renown, and for its economic contribution. You should do the same.