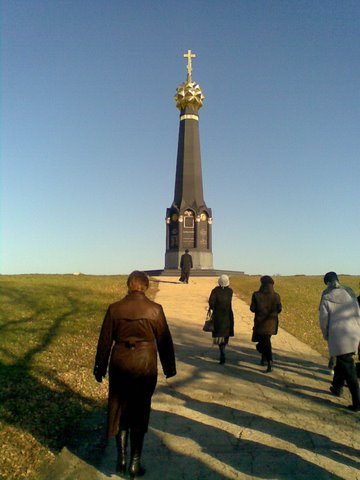 The monument to the Battle of Borodino, 120 km South-West of Moscow. 160,000 French against 150,000 Russians, 26 August 1812 by the Russian calendar. Napoleon`s last attempt to conquer Russia - he retreated 34 days later, Moscow burning all around him.

My ancestor Mikhail Lermontov wrote his poem Borodino in 1837, at the age of 23.  A part: And then we had come upon a plain  Here`s room to fight with might and main!  There built we a redoubt.  Our troops are curt on high alert  Soon as sun`s beams on cannons spurt,  And on the blueish wood-tops squirt - The Frenchmen marched right out.

Meanwhile, travelling far back in time . . . The faded yellow BASF tape was unearthed a couple of years ago when shifting some old papers. The smudged biro on the tape read Benetière Chapoutier Guigal Jun 73. Wow! Here was history, I thought. My early Rhône interviews had been done with a mix of notebook and tape - so here was Max, father of Michel Chapoutier and Étienne, father of Marcel Guigal and a small grower whose son had grown up into being a lover of Welsh rugby. Entertainment, maestro!

Horror! Muffled recordings of Jumping Jack Flash from Radio Monte Carlo were the reality - the wise words of the growers erased, except for a few dog ends as the tape ran out. We student types made do with simple entertainment in them thar days, the quality of the sound a piffling issue.

That was the Aix-en-Provence stage, a town where I lived for three years between 1972 and 1975 after leaving York University with a degree in "don't know". My mother, an old Francophile and friend of the wonderful cookery writer Elizabeth David, had suggested getting my French ("the language of the diplomats") straight, so I wandered off to Aix. There I met Melvyn Master, an English wine merchant full of ideas. These included promoting the chef Paul Bocuse's Beaujolais selection of wines in partnership with Georges Duboeuf. Paul would fly into the USA and as customs men reeled back, would declare in best Wildean terms, "Ah ave nuzzing to deeclar" as the black truffles in his pockets gassed the baggage hall.

Melvyn had another bright idea - of my writing a book on the Rhône for him, to help along his sales of Rhône wines in the United States, his main export market. After intensive study of his wine library - half a dozen books like Frederick Wildman, Frank Schoonmaker and Hugh Johnson's first and lasting classic Wine - I set off up the Rhône full of fear and wonder to interview the Chapoutiers (they flew the Union Jack flag for me) and the other few names of the day - people like the Jaboulets, Gérard Chave, Auguste Clape, Georges Vernay, Étienne Guigal and his slight, diffident son Marcel.

I hawked four chapters around London, visited four publishers and Faber & Faber took the book. I delivered the manuscript in March 1975 and was then told that the oil crisis demanded a three- year delay in its publication. Those were the days of a 3-day working week and rubbish piled high in the streets, so fair dos, I suppose.

I lived in Aix for three years, and in those days the Paris and therefore very flash connection came through Steven Spurrier, with his Caves de la Madeleine and Wine Academy. Steven's well-pressed Fiorucci jeans even got him into a Piat d'Or advertising shoot at Chenas one year, when the male model failed to turn up.

In Aix, Tim Johnston, now proprietor of Juveniles Wine bar in Paris, was Melvyn's right hand man. We would all meet for the Foire de Macon or the Hospices de Beaune, occasionally the Foire d'Ampuis. The growers were always surprised and generally friendly, certainly not used to being asked questions by keen northerners.

By now I was working for Black & White whisky for my gainful, managing exports to places such as South America and West and North Africa. I visited the Rhône in my spare time, then as now largely unable to make it keep me in the style to which I am accustomed.

Flying back on Swissair one day in March 1978 from Douala in the Camerouns to Geneva, I spotted a copy of Punch magazine in the rack. Cyril Ray, I thought - always a good read. I had been away for 6 weeks trying to sort out some unpaid containers of whisky that had piled up in Cotonou, formerly Dahomey but then the People's Republic of Benin. Morning greetings in Cotonou were set by decree, or you risked prison - "Bonjour Camarade - prêt pour la Revolution?" The reply had to be "Oui, Camarade, la lutte continue!" The struggle continues - say that again!

Cyril, whom I never met, gave the book, which I had never seen, a cracking review. Other luminaries like John Arlott, also the cricket commentator, liked it, and there it was. Except that when I got the book home, I found the map for the Northern Rhône placed under the title Southern Rhône, and vice-versa. Heady days.

I have continued to follow the Rhône and its families since then, with further Faber books published in 1982 and 1992. Articles for magazines such as Decanter have appeared since the mid-1970s, and contributions to annuals like Hugh Johnson's Pocket Book have kept going.

It is a wonderful region, with a simplicity of spirit and a strength of resolve apparent in the vignerons, especially those of the hillside north. The southerners are naturally more combustible but also are largely hands-on, with few managers in sight.

The early days were marked by visits to the village Post Office to look at the telephone directory and to ask if anyone there knew anyone out there who made wine and actually bottled it themselves. The only other way was to drive around and look for piles of bottles, and avoid the barking, biting dog usually. There were no signs, arrows, signals, no Information booth or central Syndicat. Growers accorded me half days and we wandered and wondered in gentle tempo. That is how I learnt my wine.

Now the Valley is having two books written about it - the Northern Rhône and the Southern Rhône. The close-up of the vineyards is greater than ever before. The patrimoine­ - the historical legacy - of these vineyards is deep and venerable, and they deserve charting like a good navigator's guide. The comments of those who work them and can put across the practical context of their soils and terrains is also implicit in the understanding of the wines. To quote from my latest book, "in a corner of every bottle resides a piece of the maker's soul."

When I am not in the vineyards or strapped to my word processor, I may be found on a racecourse - Cheltenham and Goodwood are two particular favourites, and Ascot was until they built the most monstrously charmless new stand at great expense. Or at a cricket match, where Lord's has provided the mightiest of settings and memories since I was 9 years old. Or in my vegetable garden, fighting on against slugs and sundry Cabbage Whites, with cardoons grown to rival Georges Vernay's. Or drinking and eating well in the company of my maitre cuisinière wife Fiona, my non-wine drinking teenage children Edward and Marina averting their gaze.

This web site is a record of my visits and tastings in the Rhône going back to 1973, with my many notebooks drafted into form for this new medium. The Northern Rhône has come first, following the University of California Press book being published. The Southern Rhône domaines will start with tasting notes, and gradually will arrive at a similar depth to the Northern Rhône - it's all a matter of time.
I can be contacted on jll@drinkrhone.com