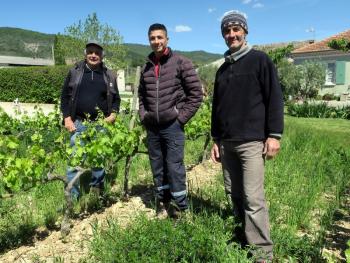 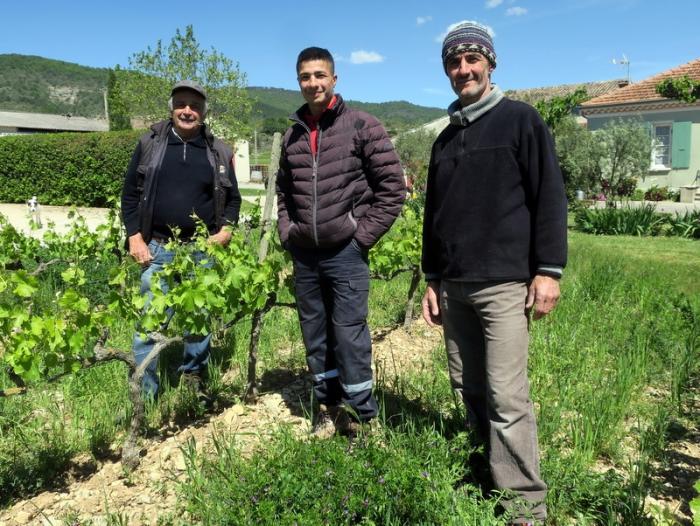 LVT 2018 r 2018 wh  Grandfather Gilbert [72 years in 2019] built the cellar in 1979, having been at the Cave Co-operative of Valvignères, the wine sold to the merchant trade. Christophe joined the domaine in 1994, and the first bottling was in 1995. Their son Paulin came on to the domaine in his turn in late 2017. They are one of four organic independent domaines at Valvignères.

The Comtes work 12 ha of vineyards, 7 ha near the domaine, and 5 ha 1 km away, on white stony limestone with white clay soils, with Grenache on mild slope grey marl soils. From late 2019 there are 3 hectares of cereal – barley, wheat, hay. They have been organic since 2001, worked with zero added SO2 since 2007, biodynamic since 2009. In the past, they sold 3.5 ha of vineyards to Andrea Calek.

They were the first family to plant Chardonnay in Valvignères, in 1987. Some of their Viognier is massale. The vinification is “semi-carbonic”, via whole bunches and ranging from 8 to 21 days for the most serious reds.

All wines are Vin de France. This is a good range, good quality address. Fruit quality is clear, with freshness in the wines, even after hot years such as 2018, the ***(*) 2018 Syrah an example: deep soils help to combat the potential stress of drought conditions. The late 1970s Grenache that makes up the Grain . . . cheux red contributed mystery and complexity in 2017, a **** wine. There is also a good Pinot noir called Du bout des doigts, 2001 Pinot that receives an 8 to 10 day vinification and brief vat raising, the 2018 a **** w.o.w. wine.

“I would harvest at the end of September, ending in late October; they were hybrid vines in those days. Now we harvest the Pinot Noir on 17 August when it’s at 11° to 11.5°, which is ripe for it, and the rest on 25 August.”
Gilbert Comte

“We have deep soils, so don’t suffer too much from drought. We only work the surface of the soils. They aren’t acid enough for Gamay.”
Christophe Comte

“We started doing a cool skin maceration for part of the Viognier harvest in 2017 – the aim is for more freshness, and it also helps the fermentation to complete.”
Christophe Comte

“2018 is a fresh enough vintage, easy to drink, the wines gourmand. We lost 30% from the mildew.”
Christophe Comte

“In the past 10+ years since we went biodynamic, there’s been a gain in freshness and drinkability, raising the pleasure of drinking. I make the wines that please me now. If you don’t work the soils correctly, there’s trouble. If you do, the fermentations go OK, etc. I am a maniac in the vineyard.”
Christophe Comte

“Biodynamie represents us, who we are, our way of being, the stamp of the vigneron as compared to the wines before, wines that didn’t have the personal touch.”
Hélène Comte