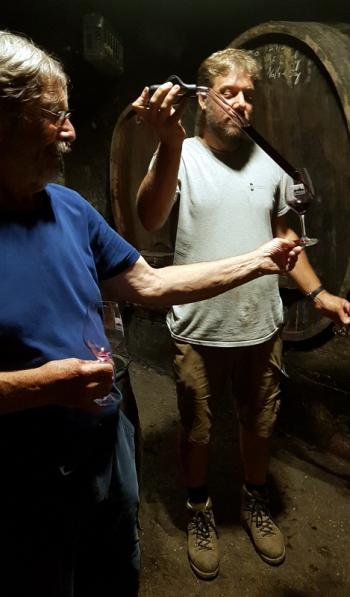 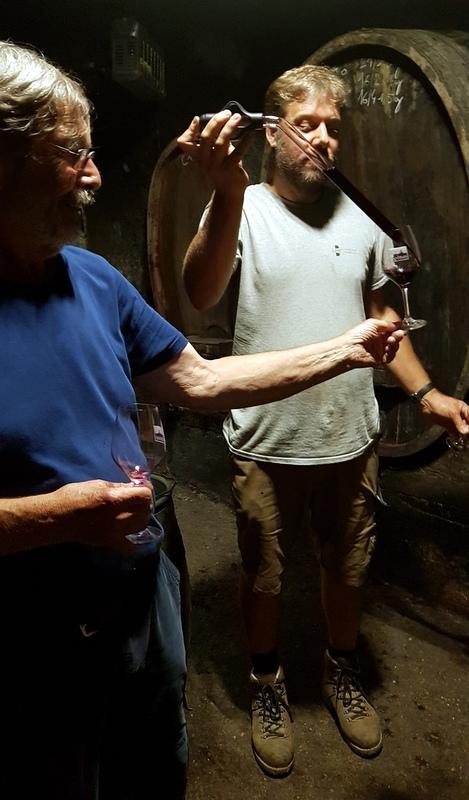 LVT 2019 r 2018 wh STGT domaine - the reference point. Prime vineyards, unhurried winemaking. It has always been whole bunch, with old oak small barrels of around 12 hl used for the raising. The wines show the depth and energy of Cornas' granite base, their lithe fruit and sinewed tannins coming together only after some years. The best vintages can live for 30 years or more: the 2015 will run into the 2050s, for example, while the 2005 is still on its tight mineral grip at 15 years. The younger vines wine, Renaissance, introduced in 1997 and featuring "young" vines between 15 and 30 years' old, is accessible earlier, and about half+ the price.

There is also a Côtes du Rhône red based on granite and galet stone soils at and near Saint-Péray; this lives well, gives a lot wine for the price, while there is also a very neat Vin de France called Vin des Amis red - character and longevity in both. The Saint-Péray is a mainly old vine 80% Marsanne, 20% Roussanne, raised 67% in vat, 33% oak barrel - very consistent and able to be drunk over six to eight years. Since around 2012, the soils have been worked more than before under Olivier Clape, with benefit for the vineyards and the quality of the fruit. From 2018 there has been only one bottling of the Cornas in October, two years after the harvest - the August bottling for the USA has been suppressed.

"For ageing the wine, here you need neutral wood with no tannin in it. The Syrah must breathe - it needs the wood to allow it to loosen and avoid reduction -and eighteen months in older casks does the job nicely."
Auguste Clape

“The esca bug has been killing the vine wood on our Côtes du Rhône Marsanne, just across from the railway on the plain. We are going to replant with Syrah. We are down to 600 bottles in 2007, and that will be our last vintage of it.”
Pierre Clape

“In 2009 we added a bit of the Cornas press wine to the vin de table and to the Côtes du Rhône to amplify them. Their crop was low – they suffered more than the Cornas, and only produced 32 hl/ha, against the higher 36 hl/ha for the Cornas.”
Pierre Clape

“We never used to have acetate at Cornas, when the grapes were ripening at lower levels: it comes on above 13° to 13.5° - it can come gradually, and disappears also. You can decant the wine. It is linked to Volatile Acidity, and you need at least 1 year in bottle to lose the acetate.”
Pierre Clape

“2000 was always a super vintage for pleasure – it was never closed. We used to show it to visitors in the cellars, but we found stocks were getting low rather quickly. It has always been round and flattering, with precise fruit.” Sept 2012
Pierre Clape

“I am paying more attention to working the soil in the vineyards, with a horse and a pulley. The horse covers the lower zones, driven by man from Châteauneuf de l’Isère. Higher up a mule can be used – he is more nimble than the horse, especially when turning at the end of rows, and also doesn’t eat the vine leaves when you stop him, either, unlike the horse. He stands perfectly still when you bid him.”
Olivier Clape

“Sabarotte [the ex Noël Verset vineyard] has improved in the last few years, was a bit vegetal; we changed the manner of pruning it, stopped putting down feeds, encouraged more vegetation with bridges linking the vines, green harvesting. Noël did a lot of maquettage, shaping the vines, which we don’t. We also prune shorter than Noël, for fewer grapes. There are some more shaded terraces on Sabarotte, plus deeper soils - its micro climate is different to the rest.”
Olivier Clape

“La Côte always has acetate from its yeasts; in 2010 a laboratory studied 22 yeasts, and two had it. It comes at the end of the vinification – when other yeasts are tired, they come through. There is a connection to acetate from those who work with whole bunches and wild yeasts.”
Olivier Clape

“From 2018 we have more space, so can do just one bottling. In the past, we did the USA bottling at the end of August, the rest in October. Now all the wine is bottled at the end of October.”
Olivier Clape

“Along with Guillaume Gilles, Thiérry Allemand and Franck Balthazar, we are among the first to harvest at Cornas.”
Olivier Clape