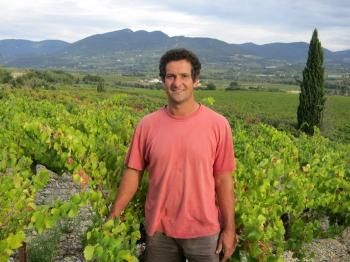 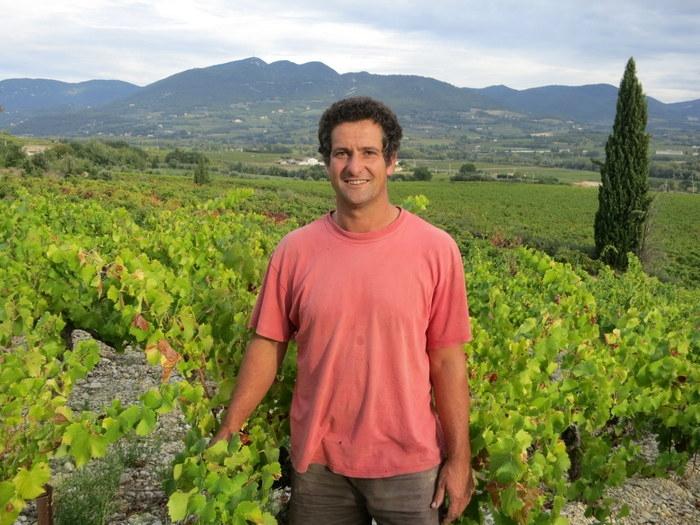 LVT 2017 r This is a biodynamic domaine that I recommend strongly if you seek wines of character and a hand made feel. Cédric is well motivated, the fifth generation; he and his wife left the Co-operative La Vinsobraise in 2004, and started to make their own wine in 2005. His yields are restrained - 20-25 hl/ha for the Vinsobres and 35 hl/ha for the Côtes du Rhône.

The wines are vinified with low intervention, raised in concrete, and represent the best biodynamic clarity - they have a real spring in their step. The Vinsobres Emile red's oldest Grenache dates from the 1930s, and is usually **** to ****(*) wine. The limited edition Les Muses, max 1,500 bottles, comes from small terraces on Les Cornuds at 450 metres, where the cool soils allow the Syrah [half the wine, the other half Grenache, both 1970s] to really declare its style, clarity and quality, far away from the confection so often found in the Southern Rhône. The 2016 is just about a ***** wine, top notch Vinsobres, thus. In line with the economic realities of Vinsobres, a hard wine to sell, the volume of Vinsobres in bottle has fallen recently.

Cédric also has truffle and olive trees, and in 2018 planted 0.5 hectare of white vines behind the house, half Bourboulenc, 25% Clairette blanche, 25% Grenache blanc.

“For truffles you need balance in the soil – so the vine should also be like that.”
Cédric Guillaume-Corbin

“I started from zero – I had help from Philippe Chaume of Chaume-Arnaud and my oenologue Andrée Jovine at Suze-la-Rousse. I started on organic from the mid-1990s, and biodynamie from 2006.”
Cédric Guillaume-Corbin

“Fruit and finesse are what I want in my Vinsobres year after year.”
Cédric Guillaume-Corbin

“2011 has handsome matter, with finesse and elegance – they are pleasing wines, won’t last that long, similar to 2006. They are wines of gourmandise.”
Cédric Guillaume-Corbin

“In 2010 I never had so few grapes, really compact bunches this year, some hard skins. I sold my Côtes du Rhône in bulk as I didn’t like it.”
Cédric Guillaume-Corbin

“Acidity in 2016 was above the level of the decade, even with very ripe grapes, so there was freshness as a result.”
Cédric Guillaume-Corbin

“2017 was very hot and very dry. You find that on the end of the palate. They are wines with a Sudiste/Southern leaning, but also freshness. I am working on elegance now, but was concerned in 2017, fearing that elegance would be lost. The fact is that biodynamie aids matters, that freshness.”
Cédric Guillaume-Corbin