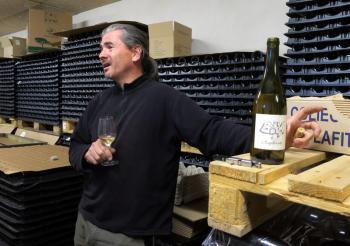 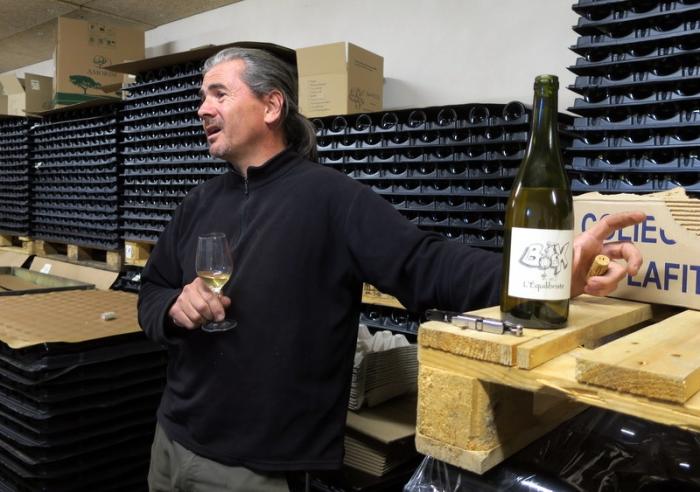 LVT 2018 r 2018 wh  Sylvain was born near Lyon, then grew up in Vienne, near Côte-Rôtie, and made his first steps in wine with the 1998 harvest for Yves Cuilleron of Les Vins de Vienne, then pruning for François Villard and being a cellar rat in the cellar of Pierre Gaillard, the other members of Les Vins de Vienne. He remained there until 2003, when he moved to Jean-Michel Stéphan of Côte-Rôtie, followed by studies at Mâcon, and trips to New Zealand and Bordeaux.

From 2005 to 2007 he spent an illuminating time at the Domaine du Pradel of Olivier de Serres at Mirabel in the Ardèche, a 150 hectare property in polyculture – vines, cereal, livestock, dairy. This is an Institute for education in agriculture, the lands bought by Olivier’s namesake in 1558! Sylvain looked after the vines and vinified there for five years, widening his experience of varieties, there being 10 different ones.

His first vintages from 2010 were made in an old building of compacted earth, the press outside, with bottles stocked at Le Mazel, an arrangement that lasted around five years. In those days, he was working a rented 4 hectares organically, producing around 120 hectolitres. Since 2014, he has worked 6.5 hectares, another 2.5 hectares taken on from basalt soils at Sceautres. The vineyards are organic. In 2016 he built a new cellar. Owing to the shortfall in 2016 and 2017, when he was hit by hail, he created a small merchant business – négoce – in order to secure production, which included buying some harvest from Mazel.

From 2018, Sylvain no longer shows the vintage on the bottles: “there’s too much paperwork involved.” The clue is the back label code which shows the year – L2018 etc. He is a real Questor, always seeking a solution to new challenges, and works with great flexibility, according to the conditions presented by each vintage. Thus, his most recent L’Equilibriste Chardonnay reads 16-17 on the label, since it’s 60% 2016 (very ripe, hail affected, 40% 2017, harvested early deliberately to provide acidity).

I rate these wines highly - they will appeal to Thinker drinkers who like provocation and the stimulus of thought from the glass. The Grenache from the basalt is called Neck, the 2018 an STGT **** upbeat wine containing iron fissure moments and serene layering. The 100% Merlot is called Suck a Rock, the **** 2016 having a naked, Burgundian take, full of interest. A blended wine is Les Grelots - 40% Grenache, 40% Merlot, 20% Syrah -  like most of his reds fermented by macération carbonique, the Grenache vat raised, the Merlot-Syrah oak raised. The 2017 is a rather handsome **** wine.

“The lime (between sand and clay)-limestone soils on St Philippe at 200-250 metres are a bit fragile to work. There’s a 30-50 cm top soil then a couch of limestone marl soils. The top soils gives mineral touches to the wines. The roots are in stony soils.”
Sylvain Bock

“The soils here rather resemble the Mâconnais, which is no doubt what brought Louis Latour to the Ardèche all those years ago.”
Sylvain Bock

“For me, basalt doesn’t bring minerality – the manganese, iron side brings fertility to the soils. Limestone soils can need nitrogen and working to activate them, while the powder of basalt energises soils on its own, naturally, by contrast.”
Sylvain Bock

“There was more mildew to the south of us in 2018. We are a bit later ripening, so temperatures for mildew weren’t so bad as down there – our “tropical Vietnam” phase wasn’t during flowering. There’s a lack of acidity and freshness, but the wines aren’t too bad under analysis. It’s a vintage of finesse, a lot of fruit – 2017 was more rich, more substantial, and you should drink 2018 before 2017.”
Sylvain Bock

“Each year there are people arriving around here, as the baton passes along. You can sell the wine quite easily, which obviously helps. More people means more biodiversity, more variety.”
Sylvain Bock

“I am doing sustainable agriculture now, agriculture of tomorrow – not in a grosse system, with mechanisation. It’s the model that pleases me.”
Sylvain Bock

“I see where I can adapt, make progress. I’m now looking at my oak raising – to better that. 2015, for example, could be tightly wrapped or reduced.”
Sylvain Bock

“My first love is Syrah, but I wouldn’t plant it here now – the summers are too hot. It’s really in the hands of very resistant varieties [to drought], ones that don’t need spraying, or hybrids that mean less finesse.”
Sylvain Bock

“I’ve never known such a dry year as 2019 – it’s been very, very dry, with no rains for six months. I lost 30%. I harvested the crop a bit less ripe, since I was fearful of high degree. I was the first to harvest around here, with my Chardonnay. It’s a big task to preserve acidity. Vines on shallow soils have suffered a lot.”
Sylvain Bock