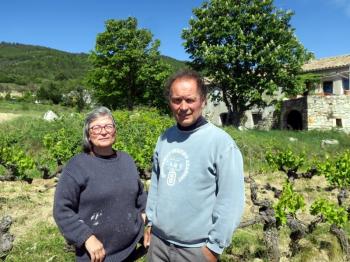 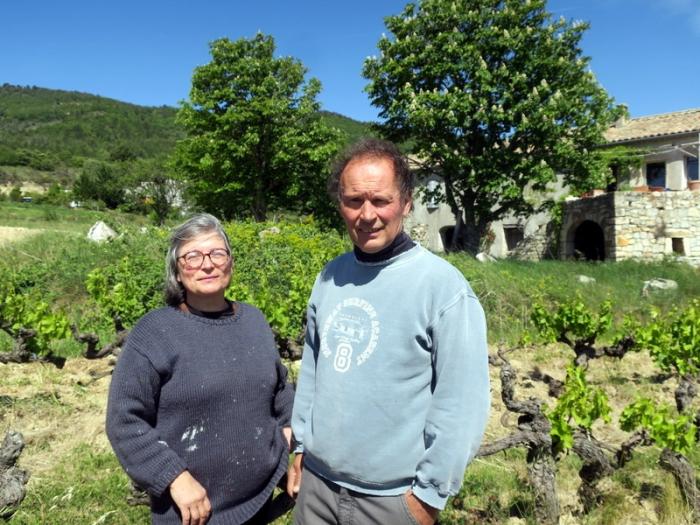 LVT 2018 wh  2017 r  The family own 25 hectares on this organic domaine, which includes woods and spare land, with 20 hectares of vineyards. 15 ha of these give their wines, while the harvest from the other 5 hectares is sold.

Gérald's grandfather was born in Marseille, but didn't go for city life, and became a daily hired worker on the land, "a pure peasant", before buying land. The Oustric family then worked their lands of around 30 hectares at Valvignères en polyculture in the past – cereal, fruit such as cherries, a few apricots, with some vines, the wine from which was sold in bulk. Gérald’s father Paul was one of the founders of the Valvignères Co-operative in the late 1950s. Paul’s wife Suzanne was from Tournon, so when it came to planting vines in those early days, she rooted for Syrah rather than hybrids.

Gérald first worked on the domaine - in the vineyards - in 1982. His first vinification was 1997. A lot of importer interest was drawn to Mazel led by the renown of Jacques Néauport, with whom he became friends in the mid-1980s. Vinification is by macération carbonique, with minimal intervention over a month. Oak raising was stopped after 2013 – now it is only concrete or stainless steel vat, which lasts 12-20 months.

Mazel has been the mother lode for many start-up Vins Natures producers in the southern Ardèche. Directly, Gérald set up Andrea Calek and Sylvain Bock, selling Calek five hectares in 2007, and Bock three hectares in 2011, since he felt his 30 hectares were too onerous.

These are zero added SO2, Vin Nature wines that express very lucid fruit, but also carry firm underpinning, aided by the age of the varieties such as Grenache (oldest 1954) and Carignan (1962, Gérald's year of birth, and 1965). Levels of alcohol on the reds are low, often around 12°. If well stocked, they can age and evolve with interest. The whites are led by Chardonnay (1987, 1989) and Viognier, the Chardonnay following in the footsteps of Louis Latour who reckoned the clay-limestone soils well suited to Chardonnay back in the 1970s. Cabernet Sauvignon has been abandoned, due to tiny yields in the face of drought summers, while Gamay d'Auvergne, not du Beaujolais, will be planted in 2021.

“I was isolated here in my adventure in the 1980s, with my inspirations coming from the Beaujolais, with Marcel Lapierre and Jacques Néauport around 1985 and Guy Breton in the Loire. I didn’t know the Thibon family at Mas de Libian.”
Gérald Oustric

“My first vinification was 1997; I wanted to make the most natural wines possible.”
Gérald Oustric

“2016 was our largest harvest since we started in 1997. The saying that “after a large crop, the vine takes a rest” applied the next year; 2017 saw a small budding, so there wasn’t stress in the vineyards, with the root systems quite deep, too, in that hot year.”
Gérald Oustric

“There is less Mistral wind here than in the Rhône corridor; it’s very rare to have trees overturned. This means we have the benefit of the Mistral without the inconvenience.”
Gérald Oustric

“We harvest in small 18 kg boxes, and harvest only in the morning. We can leave the crop in the cool chamber, which used to be at 5°C, but is now at 15°C. All the reds receive a macération carbonique in concrete vats, a minimum of one month maceration.”
Gérald Oustric

“We made Vin de pays des Coteaux de l’Ardèche until 2009, when my mother was ill, so I decided to do only Vin de France. It’s just simpler in respect of the varieties.”
Gérald Oustric

“We used to grow Cabernet Sauvignon, but it very much suffered from drought conditions, with yields of 5 hl/ha, and didn’t please us. We are going to plant Gamay from the Auverge, not the Beaujolais, in 2021.”
Gérald Oustric