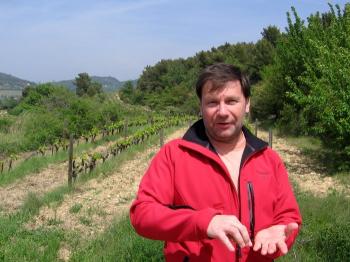 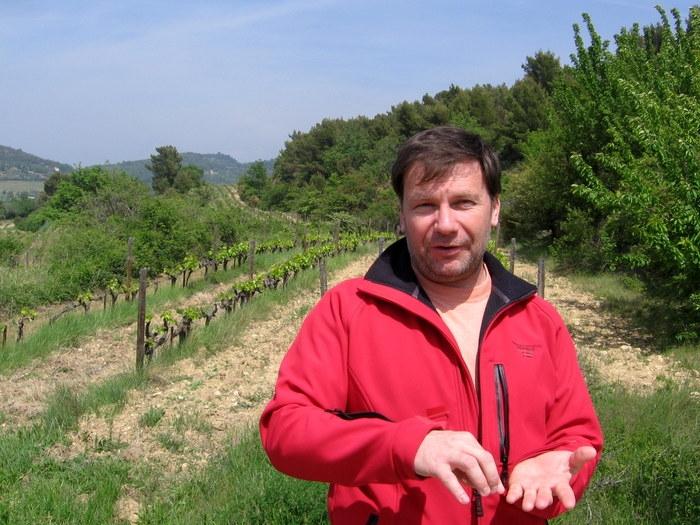 LVT 2017 r 2017 wh This is an organic domaine, created in May 2003 after Philippe Gimel had worked at Domaine de la Janasse (2002-03) and previously at Château de Beaucastel (2000-2002) in Châteauneuf-du-Pape. Big wines. Philippe is from Lorraine, and worked for five years as a pharmacist in Nancy. He is an active internet blogger and informer. The 2003-05 vintages were made in a friend's garage, from 2006 to 2015 he used the hangar of a cherry grower. From 2016 he has had his own cellar at Malaucène, which has permitted him to to organise better fermentations, given the installations are much less cold than they used to be.

These are big red wines of good character, raised for up to two years, with never less than 80% in vat. In the exceptional vintage of 2016, the red Ventoux La Source was a **** Thinker's Wine, with subtleties, and the L'Argile was also a **** wine, in the cool style of this domaine. The Ventoux La Pierre Noire red, 80% Grenache, 20% Syrah from the early 1970s, comes from poor rocky clay soils on the Dentelles de Montmirail & St Jean du Barroux, and it was a balanced **** wine in 2016, despite power and generosity.

The reds age well, as does the white Ventoux La Montagne, with Philippe deliberately holding back its issue until six to eight years after its vintage, a move that is merited.

“My vineyards are surrounded by forest, and there are 50 small plots with cherries, almonmds, blackberries, apples, pears, peaches, Mirabelle plums, figs all growing around about."
Philippe Gimel

“We are 2 weeks behind Châteauneuf-du-Pape – hence we can have snow on 28 Spril, and we start May very slowly.”
Philippe Gimel

“My whites can take 5 years to be tasteable.”
Philippe Gimel

“I do not want to use no SO2 at all; I taste and apply it at crictical moments, as it is needed. A put in a little at harvest time, can do it during the vinification, and always use it at bottling.”
Philippe Gimel

“From 2016 with my new cellar at Malaucène I have a temperature control system, except for me it was always a challenge in the past to have enough warmth to get the fermentations going (the cellar was at 12°C) and running, so that is no longer a problem, in fact is much easier.”
Philippe Gimel

“I have Syrah in three places, with a pH of 3.3 – more acidity than the northern Rhône. I will do three Syrah wines.”
Philippe Gimel