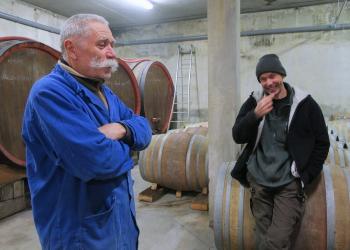 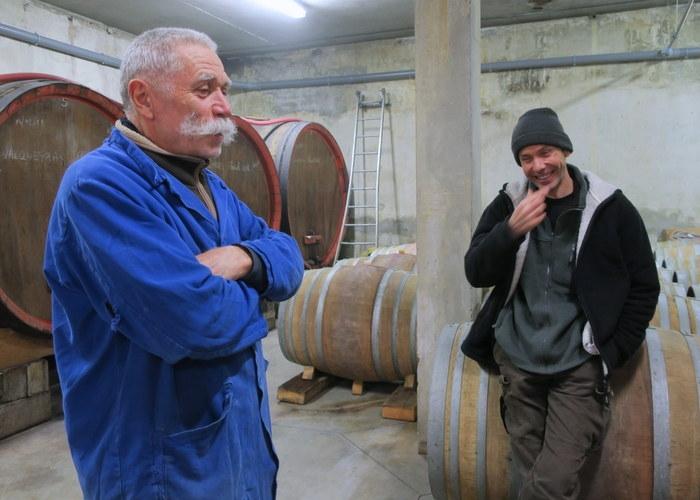 “I like to assemble early – soon after the sugars and malos have been done.”
Serge Férigoule

“Doucinelle 2005 is for drinking in warmer weather. Lopy 2005 is more structured but you could drink it a touch cool – at around 15° - with a rib of beef – but that is a sin, really.”
Serge Férigoule

“2013 has been hard to sell; people expected massive wines from Vacqueyras.”
Serge Férigoule

“There was a profusion of grapes in 2014 – we spent four months selecting the bunches. The vines wanted to recompense for the struggles of 2013 – there were flowers everywhere. Our yield ended at 33 hl/ha, against just 17 hl/ha in 2013.”
Frédéri Férigoule

“Our whites are keeping wines. You should leave them to one side for three to five years. They are always better in the less full vintages, when there has been more rain.”
Frédéri Férigoule

“The large crop in 2014 needed managing. The wines became ready very quickly, as they did in 2011 and 2008. They have less character than the 2013s, and are agreeable, balanced, based on pleasure, rounded.”
Serge Férigoule

“We are reducing the old Syrah for Lopy bit by bit. We may introduce Carignan for more acidity. The Plateau des Garrigues is too hot for Syrah, and in three days becomes too ripe.”
Frédéri Férigoule

“The 2017 harvest was very healthy, the stems in good shape, so we included some of them, and did a no SO2 vinification this year. We just lacked juice.”
Frédéri Férigoule

“The Oumage Vacqueyras started as an attempt to make a different wine, then to change the usual blends. The Grenache used for it is the same as Lopy.”
Serge Férigoule

“2018 was a catastrophe – we weren’t vigilant enough and lost 50%. The mildew went directly on to the bunches and the leaves at the same time. We were taken up with planting in April, as it had been too wet to plant in the usual slot of February. There was 30°C heat in the third week of April. We did a copper treatment, but the damage was done. It took us three weeks to harvest half a crop, which shows how complicated it was. We got to 17 hl/ha – what we harvested was OK, though it didn’t ripen easily.”
Serge Férigoule

“In 2018, one vat finished its sugars in just two days, was 13.5°. We are in unknown territory these days.”
Serge Férigoule