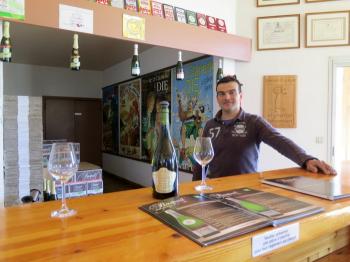 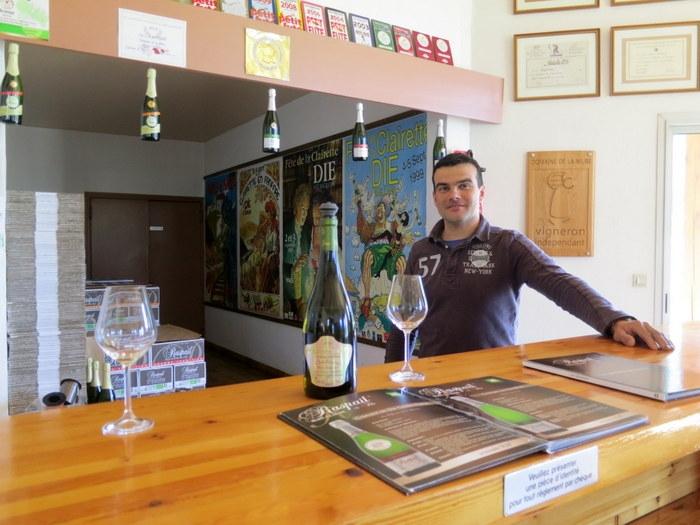 LVT  2015  r  2014 wh  Top address at Clairette de Die. Organic since 1997, with both father and son having worked in Champagne. Frédéric [pictured] studied at Mâcon Davayé, and then worked between 1995 and 1997 chez Bollinger. Saillans is an early ripening area so does well in years such as 2014. The family have been moving away from flatland vineyards in favour of hillside or slope vineyards in recent years. The Raspails are the last family to decant on the pupitres rather than filtering after the take-on of mousse. The Clairette is turned by hand (remuage).

The 100% Muscat Clairette de Die Must and Crémant de Die Cuvée Flavien are very good, and the whole range presents consistent quality. The Raspails also make a good vin de pays Syrah from a well situated and recently revived hillside called La Roustière and a lively but well founded Chardonnay vin de pays, based on 1986-88 vines. They also have a holiday home for 2 to 4 people.

“Aligoté has been allowed in the Crémant since 2004, so we planted ours in 2002. We are very happy with it; you must keep on top of yields. I foyu don’t look out they can be 80-90 hl/ha, whereas the limit is 50 hl/ha. It resists rot and oïdium better than the Chardonnay, and brings minerality, freshness, finesse.”
Frédéric Raspail

“We still do the remuage by hand, for eight weeks. Others use the girating palette. If you do it by hand, the mousse is finer. If you filter, the mousse is more abundant. Any remuage wine can only be made from the wine of that specific year.”
Frédéric Raspail

“If you filter, you can disgorge within four months; if you do remuage by hand, it is 9-10 months as you have to wait for the yeasts to finish.”
Frédéric Raspail