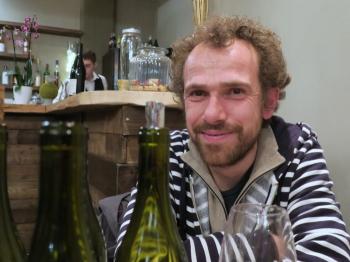 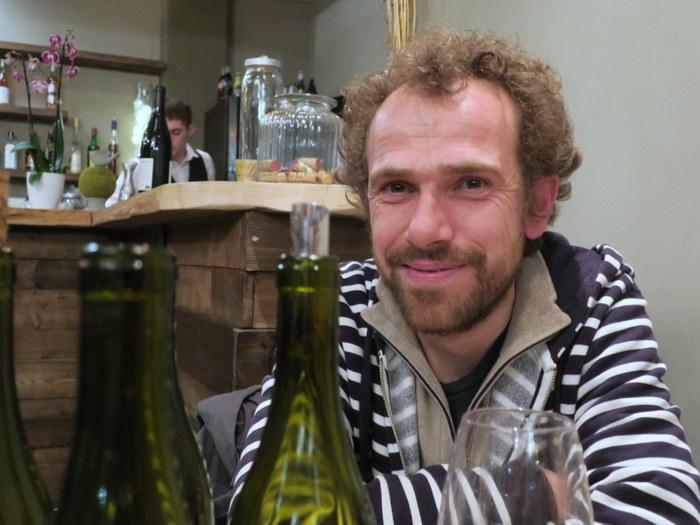 LVT 2017 r 2011 rosé 2010 wh STGT leaning domaine, publicity shy, the vineyards organic. No Muscat de Beaumes, just red grapes, a little white. The Beaumes-de-Venise Cuvée Saint-Martin red wine is my preferred [it was a ****(*) STGT wine in 2016, a ****(*) STGT wine in 2015, and a **** STGT wine in 2014 - what a hat trick], along with a garrigue-endowed Côtes du Rhône Les Romanins red. Guy Jullien's first vintage was 1980; I remember his seemingly “wild” vinifications, and organic leaning from those days, when it was very unfashionable. His father Aimé created the cellar in 1964; he had worked on polyculture – fruit, vines, olives – but the frost of 1956 destroyed the olives, so after that the domaine was 65% vines. The first bottling came in 1964, early for the region. Better cellar equipment was introduced in 1996, and all the crop has been destemmed since then. Son Thomas started in 2006, and the wines under him are very drinkable. There is very low sulphur dioxide use, just a little at bottling. Thomas has a small merchant wines range, too; these trade as www.lesvinsdethomas.com

“We only apply S02 at bottling, never before then.”
Guy Jullien

“For the first time ever we started to harvest in August, the 30th, at St Hippolyte – 2010 had been 4-5 September, for instance. We picked the rosé and the Ventoux gérine crop, and eventually harvested over 4 weeks. It had rained in mid-August, so we waited for the vines to dry off after that.”
Guy Jullien

“I planted the Counoise at Le Barroux to lighten the Grenache; the vines face west, and receive a lot of late sun until 8.30 pm.”
Guy Jullien

“All the crop is hand sorted in the vineyards, so in the cellar we don`t have to do a lot of things.”
Guy Jullien

“We have officially been organic since 1998. The domaine was organic in my youth, then I tried chemical products for 6 or 7 years, didn`t like that, and reverted to organic.”
Guy Jullien

“We seek reds that have freshness and are digestible, and can live as well.”
Guy Jullien

“We don`t seek acidity in our whites – we want richness and complexity, so the malo can be done. I would eat sauced chicken in a cream sauce or grilled fish or cheese such as Beaufort or goat with our white.”
Guy Jullien

“In 2014 there were big, fat bunches, a lot of them. We had a crop of 40 hl/ha. Ripening came gradually, and there was the risk of rot. The 2013 harvest was later than 2014. The wines have good freshness, acidity, balance.”
Guy Jullien

“We use our 1911 and 1912 Grenache for massale, hand grafted cuttings to plant new Grenache vines. It takes five years to complete this and plant out. These old vines probably have 15 to 20 metres of roots. We also hand graft our Counoise – that comes from Châteauneuf-du-Pape.”
Thomas Jullien

“I started in 2006. Pa gave me the key to the cellar, and said “off you go”. In the winters of 2006 and 2007 I went round France’s wine regions to visit people from three hours to three days. I spent most time in the Loire.”
Thomas Jullien